Analog On is an experimental electronic music ensemble that composes and performs on vintage analogue electronics and modular synthesizers. The group consists of Shauna Caffrey and Lara Albergo on the oscillator, theremin, saw and electronics, and Richard Duckworth on modular synthesizer and effects. The Analog On made their debut at the Ideopreneurial Entrephonics II festival at the Freemasons’ Hall in April 2016, and has got its first release – recorded on the iconic Moog System 55 in the cockpit of the Moog Sound Lab at the Tonmeister Studio in Surrey – available on Spotify: https://open.spotify.com/artist/5XjeFmuCRG7JWv0pZir1UT?si=Zj8C6JgPRk-C6ENz3m_z0Q. The aesthetic is that of the time-warp cultist with retro and future aesthetics co-existing in the same cultural and temporal space.

Analog On performed, amongst others, at Wesleyan University (Connecticut), Culture Night (Dublin), Trinity College (Dublin), Bennigans Jazz Club (Derry), Cultúrlann Uí Chanáin (Derry) as part of Oscillations and Modulations Festival, in Swansea College of Arts as part of the NAWR Anois, Celtronic Festival 2018 (Derry), Sunflower festival 2018 (Belfast), Swell festival 2018 (Arranmore), Smock Alley Theatre as part of ZEIT III, Sunflower Public House (Belfast) and Dublin Bowie Festival at The Grand Social, as opening act for Art-Crime Inc, with our spacey analogue tribute to Major Tom on 8th January 2019. Our next performances are 10th March at Sunflower Public House (Belfast) and 22nd March at Bennigans Jazz Club (Derry). We are planning to release our new album by the end of this year.

Richard Duckworth studied electronic music under Herb Deutsch at Hofstra University – this is where he was first introduced to the Moog modular system. He worked as a sound engineer at CBGBs for many years and is now a lecturer in music technology at Trinity College Dublin.
Shauna Louise Caffrey is a musicologist and multi-instrumentalist based in Cork, Ireland. She is a founding member of Analog On, with whom she has performed at Ideopreneurial Entrephonics II, EMG Presents (Wesleyan University Connecticut).
Lara Albergo studied Comparative languages and cultures in Italy and is now completing her MA in Arts Management at UCD Dublin researching on women in music technology. Passionate about electronic music since early age, Lara joined Analog on in September 2017 and since then has performed regularly as well as looking after the management. 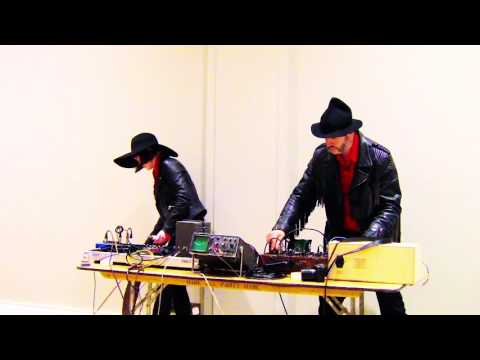