Andrea Booth is a singer songwriter who has been recording her own songs since 2016 when she wrote Sand In my Shoes Blues. Her song and video won the first Uke Factor Competition at the 2017 UKULELE HOOLEY. Two years later she wrote the theme song for the 10 Anniversary of the Ukulele Hooley in 2019, and performed a guest slot along with the Dublin City Rounders and RUGS.

Meanwhile she wrote 5 more songs and recorded them with the DUBLIN CITY ROUNDERS. She was a frequent guest at the Wexford Cabaret and also performed as a regular guest with the NIALL TONER BAND at some great venues including the famous Mick Murphy's in Ballymore Eustace.

Her latest recording, Someone Else's Paradise, recorded in Wexford and Nashville, was on the RTE Recommends Playlist , and included in shows hosted by Shay Byrne, Ray D'Arcy, Niall Toner and Ronan Collins. Her songs also make a frequent appearance on Quarantine FM. 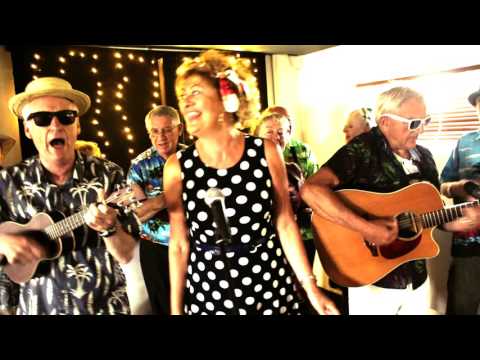 Sounds Like:
I can't really say who I sound like - just myself I guess! My style is my own and I have never consciously copied another artist. However, I have been influenced by some of the artistes mentioned below.
Influences:
Amy Winehouse, Beatles, Billie Holiday, Bob Dylan, David Bowie, Eilen Jewell, Everley Brothers, Madness, Pogues, Specials, Squeeeze, Stones, Tom Petty