“Wow, what a song…talk about transforming the pain of a break up into a thing of beauty”. - Fiachna O Braonain - RTE Radio 1

Singer-songwriter Annmarie Cullen has landed back on Irish shores, after enjoying a hugely successful songwriting career in LA with Disney and Warner Chappell, working on Nickelodeon shows like iCarly and Drake And Josh, CBS drama Blue Bloods and as a performer in her own right with band Saucy Monky.

When a move to Barcelona, where she worked for a time outside the music industry, ended in a marriage breakup, Annmarie returned to her native country to reignite her passion for music.

Annmarie’s new single, the pared-back yet searingly powerful ‘What I Once Meant To You’ beautifully balances delicate vocals with silky smooth piano and symphonious strings as she bares her soul and reflects on a heart-breaking chapter in her life. The single reached Number 1 in the iTunes Singles Chart in Ireland.

This lovelorn offering, accompanied by a self-directed video, is the first of three singles Annmarie plans to release this year, with an album and live shows also in the pipeline.

With the allure of music and adventure calling to her, Annmarie left her native Dublin and moved to Los Angeles in the 90s, casting all her fear of the unknown aside.

After an obligatory spell waitressing, she secured staff writing gigs with Disney and Warner Chappell.

It kicked off a high-flying music career for Annmarie as she went on to help soundtrack some of the most popular TV shows in the last two decades, such as light-hearted Nickelodeon shows like iCarly and Drake And Josh and the high-octane, Tom Selleck led crime series Blue Bloods, as well as cult lesbian film and comedy-drama And Then Came Lola.

As exciting as that was, Annmarie truly felt at home performing on stage, which she first did under her stage name “Annmarie Montade” and then alongside New Yorker Cynthia Catania touring with their band, naughties indie darlings Saucy Monky, across America, the Czech Republic and Ireland.

Along the way, there were encounters with Katy Perry and Sara Bareilles - and Annmarie has many other LA stories she'll tell you about over a drink!

Annmarie moved to Barcelona in 2016 with her then-wife as her working-life took a new direction, with the offer of a tech role. Their marriage ended in late 2019 and fast-forward to 2021, Annmarie is back in Dublin and “making some of the most emotionally charged music you will hear this year”.

As was the case for many musicians, Covid-19 posed certain challenges for Annmarie, but she was undeterred as she pledged to return to the thing that always served her most since a young age: music.

This resulted in the emotive and expressive new track ‘What I Once Meant To You’ available for download and to stream everywhere now.

Her new single CIRCUS will be released June 24th. 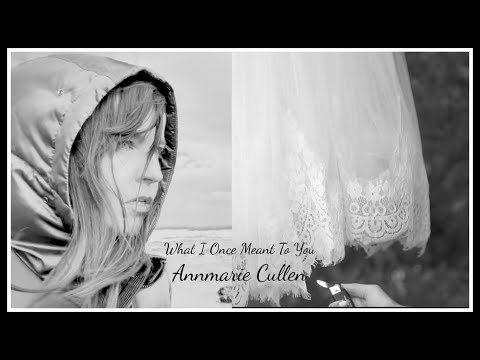 What I Once Meant To You
Circus