Eve Williams is a singer and songwriter named One to Watch twice by Nashville Songwriters Association International in 2015. She is influenced by her Celtic homeland of Northern Ireland and by the music of Moya Brennan, Kate Bush and Peggy Lee. Her four octave voice makes for diverse melodic and harmonic potential. Eve’s album Twenty Miles from Home has been receiving airplay in several countries including the UK, Ireland, Germany and the Philippines. John McGlynn of Anūna has described her as having ‘a great voice’ and Pamela Ballantine remarked on her 'fine, true voice' on UTV Life. Her songwriting was complimented by Moya Brennan when she performed at CluBeo, Donegal in 2013 saying 'You really know your craft'. Eve has played at international festivals including Celtic Connections and YouBloom Dublin and is currently recording a new album. Her music is available online and via Tower Records, Dublin and Coda Music, Edinburgh.
Eve has appeared on several radio and television programmes in Northern Ireland and beyond including UTV Life, U105 Belfast, BBC Radio Ulster, Ciaran Dorris’ Sony Award nominated Sunday Show on Celtic Music Radio and BBC Radio Cambridgeshire.
Eve is also a member of the Irish Songwriters Guild which promotes Irish music throughout the world and seeks to represent the best of Irish songwriting.
Eve is a representative for the National Rheumatoid Arthritis Society’s Simple Tasks Campaign.
She completed a Master of Music degree in Songwriting at Bath Spa University in 2012 and now teaches songwriting at the Ongoing Learning Centre, Queen's University of Belfast. 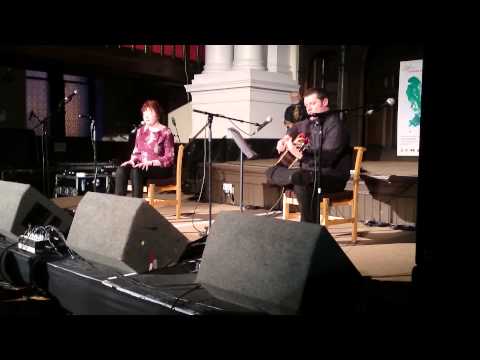