Extravision are a post punk indie band formed in Dublin in 2017 and featuring members of Sissy, Surge, September Girls and Grave Goods. After establishing themselves in the DIY and punk music scene, they came together to explore new sounds and melodies as Extravision. Their music combines melodic bass, airy sustained guitar, heart-wrenching harmonies and pounding rhythms.

Extravision's most recent release is single They Don’t Know, was featured on Nialler9’s ‘Dublin is Sound’ compilation and launched with a live performance in Lost Lane in May 2022. The record is a compilation featuring Gemma Dunleavy, Junior Brother and Soulé. In 2020, their song Fire was included on ‘A Litany of Failures Vol.3’ - a compilation record featuring Irish acts like Silverbacks and Junk Drawer. Their song Don’t Wanna Be Here was included on the historic ‘Karate Club LP’, which celebrated the 10 year anniversary of the autonomous punk space in Dublin. Extravision’s self-titled demo was released in August 2018 on Art For Blind Records. They released their first single Our City in November 2019 produced by Daniel Fox (Gilla Band).

Extravision made their post-pandemic return to the stage in 2022, supporting American punk legends ‘F*cked Up’ in the Grand Social in April. Relevant festival performances include: Body & Soul Festival 2019; It Takes a Village 2019; Quarter Block Party 2019; Women's Christmas Festival, 2020; BentFest 2017 (queer music festival, London). They have also toured extensively in Ireland and the UK and have played hometown support to international bands such as Priests, Big Joanie, Terry and many more.

REVIEWS
“gothic post punk jangling, dreamy and pillowy without being watery or precious... the music leans, at various points, on tom-heavy Banshees touches and gauzy 80s 4ADisms.” - The Quietus 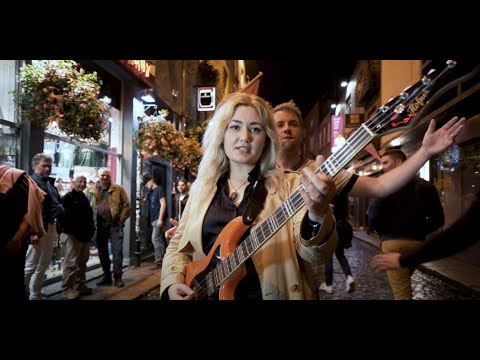