Howlin'Dowlin are a gang of four who specialize in Rock'n'Roll music that is melodic and
hard-hitting in equal measure. Obvious influences include Oasis, The Strokes, Supergrass,
Nirvana, Libertines and Kings of Leon, less obvious would be the Graham Coxon wing of Blur.

Front-man and principal songwriter Bren Dempsey finally got to form the band in the summer of 2008.
After a 5 year-stint in "The Mighty Stef" the dream of having his own band was finally alive and real - teaming up with Vinny Duggan from "The Things" to make his songs heard. With a few early set backs the band are now making up for lost ground and are sounding better than ever with new members Hog and Tim George. The boys have been working very hard and it seems to be paying off.

To date the band have been building up a loyal fan base with memorable gigs in their native Dublin.
They notably opened up for Supergrass side-project "The Hot Rats" and recently blew the roof off the
famous "White Trash" venue in Berlin at their first international headliner. The boys recently won the Captains Live "Battle of the Bands" competition. The band are on a high with the prize which is a trip to Los Angeles and a prolific headline slot at the famous "Whiskey a go go" venue! The band plan to tour L.A. and begin recordings their debut album when over in the states. Also on the cards is a European and Irish tour.

If debut single "Sussed" is any indication of what we should expect from this explosive young band then its a strong prediction that the future is ultra-bright for Howlin'Dowlin.

Recently released debut single seems to be picking up well on the
Irish music scene. The single was picked by Hotpress for their 'Pick of the Fortnight'
in Jackie Haydens first cuts c.d reviews column and from there on will be played on
more than 10 Irish radio stations! 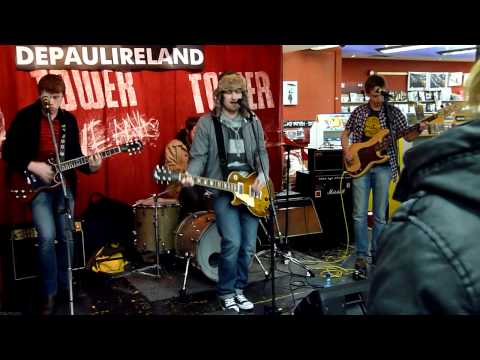