Band discription
The nucleus of this band hails from the west coast of Ireland, a region of county Clare, wind-swept, wild and weather-beaten. A place, so inhospitable is the terrain that flowers grow directly out of rock and the rain slants ‘til it slings itself sideways. Here life is at its most elemental, cruel and deranged. There is no in-between, if anything wants to live here, survival is not an option. Thrive or die. Those are the choices.

And so has grown the life-full music that springs from the collective voice of NoLand Folk. An array of talent and instrumentation, (cello, violin and box engaging with the more traditional rock group set up of guitar, drum and bass) combine to give these songs room to breathe, whimper, howl, roar and rejoice. After having launched their second album this year, they have rightly earned extravagant praise with comparisons to the macabre worlds of Cave and Waits, “..a frightening, disturbing, rip-roaring tapestry of music ..” and have a burgeoning reputations a one of the best live acts in the West, repeatedly filling venues and quickening the crowds therein to the crest of chaos and slowly back again.

NoLand Folk are set to storm the borders of man’s creation, and drown them in Songs of the Soul.

Band Bio
We are all adrift in the Wild West of Ireland. Paddy was being chased on a 'yet to be discovered' Island by tribes of mongoose when he was picked up by a Merchant Ship. On his return he had learnt many a fine sea shanty and also how to 'affect a limp'. He sometimes can be found gazing out to sea and swaying slightly. The Amazing Aland Assiri we found wandering dazed on Lahinch beach one afternoon, and after some fortifying hot ports realized his violin playing was actually rather quite good and now he has become one of us too.... A... When Edel was about to be arrested for digging under local aquarium, 'Seaworld' in Lahinch for the 12th time, we gave her a most clever alibi. While we can't of course officially support her archeological findings of a lost civilization underneath said 'Seaworld', we can testify to her musical talents and lovely humming skills... James thought his life was fated to be spent alone, as the only orphan in Lahinch orphanage. His accomplishments so far had consisted of teaching mice how to 'high five'. His skills soon came to light at the local Talent show which he won, being the only contestant. The band just had to have him! 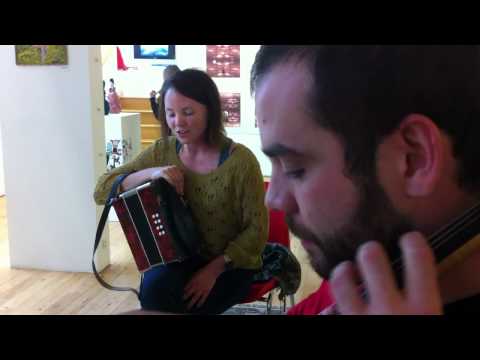