Stephen Joseph McArdle is an Irish songwriter and musician, Artist in Association at Droichead Arts Centre and is known for his work as the singer and guitarist in contemporary Irish folk band KERN with Brendan McCreanor (uilleann pipes) and Barry Kieran (fiddle). With SJ the band released two critically-acclaimed albums, both produced by Trevor Hutchinson (Lúnasa, The Waterboys). The albums are a mix of songs and tunes from the band’s home County of Louth along with SJ’s songs and the band garnered plenty of national airplay in Ireland (including RTE Lyric FM and Radio 1), including live appearances on RTÉ Radio 1, Newstalk’s Pat Kenny Show and Raidio na Gaeltachta. The albums have also received some impressive reviews.

More recently SJ has been working on a project called Port a song-cycle based around research into the stories of Drogheda’s historic Port. The song-cycle has been presented as a live show featuring Carol Keogh, John Ruddy, Michael Holohan, Josh Johnston and Brendan and Barry from Kern and is currently being recorded as an album.

As a singer-songwriter, SJ has also released three albums, most recently Blood and Bones in 2011. The songs feature contributions from some of SJ’s heroes like Rodney Crowell, guitarist Richard Bennett (Steve Earle’s Guitar Town) and the Love Sponge Strings (Bruce Springsteen’s The Rising).

The album’s lead-off song, “Two Steps From Heaven” was the main song in the Cecelia Ahern-written movie Between Heaven and Here. Accompanying the album release was some significant media attention and reviews and very successful German and Irish tours.

Another of SJ’s songs, “Till The Docklands Drown”, is performed during Element Pictures’ A Date For Mad Mary (2016) and several of his readings of traditional Irish songs are featured in the 2019 movie End of Sentence, starring Sarah Bolger, Logan Lerman and John Hawkes.

He performed songs from Blood and Bones live on the Ian Dempsey Breakfast Show on Today FM and on Ireland AM on TV3.

In 2009 he completed a European arena tour as special guest to Reamonn, playing to 70,000 people over three weeks.

SJ has also been in occasional demand as a session musician, playing mandolin for Ricky Warwick as they opened shows for Bob Dylan (Odyssey, Belfast) and Sheryl Crow (Point, Dublin). He has also shared a stage or studio with Neil Hannon, Stewart Agnew, Joe Elliott and Miss Paula Flynn.

“Quite lovely … an intriguing release. Those interested in trad music that crosses over into singer/songwriter territory will find this album particularly attractive, but its accessibility will have easy appeal to general audiences. Thumbs up!” – The Irish Echo

Praise for Blood and Bones:

“SJ’s deep, sonorous voice brings authority to the songs. If Whipping Boy were raised in Nashville they might sound like this” – Mail On Sunday 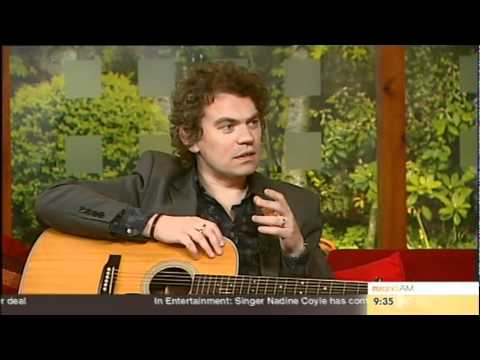