We Go Go are a five piece alternative rock band from the Irish midlands musical hotbed of Mullingar, described as 'emo-flecked-alt-rock' by Conor Moloney of Drop-D.ie. The band includes, brothers Gerard Wayne & Clive Doyle, along with Ciaran Fagan, Keith Naughton and Elaine Faulknan, and have been writing, rehearsing and gigging since March 2009.

In October 2009, We Go Go released their first single, 'Nitpicker' which reached no.4 in the downloadmusic chart.

In 2010, the band were chosen as one of just 20 unsigned bands to perform at the JD Set, earning a great review from Jackie Hayden of Hot Press.

Having just finished their first Irish tour, which gained them great reviews for their live shows, the band headed into the studio to work with producer Leo Logan (The Vibes), and recorded two tracks, which have been mastered at the legendary Abbey Road Studios, London. With several other tracks in progress, We Go Go will be releasing their first EP, "Space and Time and Everything," in the Summer of 2011.

"With 'Nit Picker', We Go Go have a worthy song with chiming guitars and an appealing build-up from a restrained start." (Jackie Hayden, Hot Press, March 2010)

"One of Ireland's most promising rock bands is Mullingar's 'We Go Go'... They write clever rock songs and have a superb frontman." (Peter Nagle, 2uibestow.blogspot.com, May 2011)

"We Go Go (bring) a more subtle touch to the proceedings with some emo-flecked alt-rock. Angular and hard-edged, but with an eye for a bittersweet melody and some brilliant guitar interplay, the band make for an impressive prospect." (Conor Moloney, Drop-D.ie, October 2009) 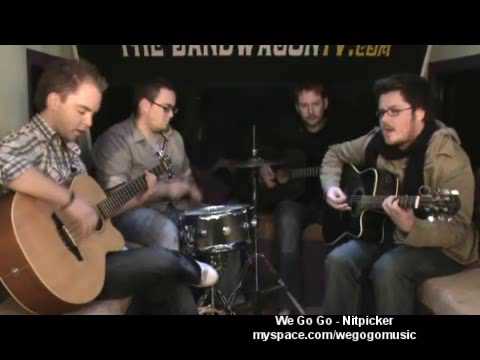