Fresh from returning from an abandoned warehouse in rural Portugal, (where they hauled a studio and Bill Ryder Jones to spent a month recording their debut album) Wynona Bleach have spent their lockdown mixing their debut alongside Andy Bradfield and Avril mackintosh (Bjork, Rufus Wainright, Spice Girls, Roger Waters, Marillion, Bryan Adams.) - who they met at a chance meeting after being smuggled into a prestigious awards ceremony in London, February 2019.

"Wynona Bleach declared their arrival in 2018 with a song called ‘Eyes Burning’. The guitars rise up like fuzz-mountains and the melodies are strangely sweet. It’s a rich combination and the critic who invented the term “gaze-pop” may be onto something.

‘Eyes Burning’ is a song about absolute belief – a signature of the Wynona Bleach method. It’s a celebration of the creative life. The band members, based in Belfast, are familiar with all-night industry and epic results. Guitarist Jonny Woods explains it thus: “Staying up late and doing the things you’ve done your whole life may seem to take a toll on your body – like your eyes are burning. But if you think it’s really important, do it. Be 100% about it.”

Wynona Bleach emerged from a previous enterprise called R51. They played Reading and Leeds festivals and were filmed in concert by the BBC at the iconic Ulster Hall. There was a line-up change in late 2017 and a 6,000 mile tour of the Russian Federation, with 12 gigs in as many days. They outgrew the name just as a new character was forming. Singer Melyssa Shannon was managing the havoc with her own variety of cool. So the name presented itself. It is not un-related to Wynona Ryder and also to ‘Bleach’, the first Nirvana album.

The Russian adventure solidified their purpose and roused the locals. New bass player Carl Gilmore shared those eight hour drives alongside drummer Matt Killen and guitarist Aaron Black. It’s a multi-dimensional crew, versed in art, tech and sonic bravura. Their shows are celebratory, a mass of misfits and outsiders.
“It’s alright to feel you’re not part of any groups or gangs,” says Jonny. “You can just be a human being and not worry about it. It’s OK to be yourself and be part of your own thing: start your own gang.”

Their new songs are soaring, surprising and various. Like the best acts, they play with a near-telepathic grace. ‘Eyes Burning’ is the story of the dedication that has brought them thus far. Wynona Bleach is the excellent new friend you’ve been waiting for." 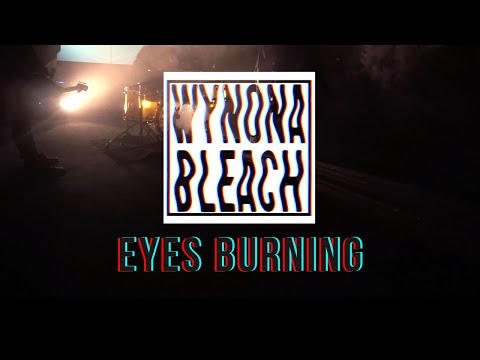