Striking sincerity flows throughout Podge Lane’s April 2020 EP, Weak Beneath The Knees.
Culminating Podge’s intricate instrumentation and encapsulating lyricism, his songs provide
glimpses into moments of crucial self-awareness lightened by meditative whimsy. The lead
single, ‘Knockabout’, dives into his own feeling of self-worth, as he exclaims, “I use my
humour to distract from the most obvious fact that when the pressures on I don’t know how
to react.” Entering the song-world, Podge heightens his life experiences within dense musical
structures which serve as sturdy walls to portray honest revelations. Podge’s determined
candour expressed within the EP garnered him impressive accolades amongst the likes of
Bayview Sounds, who describes the EP as “genuinely quite breathtaking,” and Broken 8
Records who crowned the EP as “an alt-folk wonder that shines with dark, personal touches.”
Weak Beneath The Knees, however, is the result of an expansive catalogue that is bound by
Podge’s distinctive musical prowess.
Based in Cork City, Podge Lane yields his unique authorial voice alongside folk and alt
stylings. Melding his honest yet witty lyrics, Podge emanates the styles of Randy Newman
and Father John Misty, while simultaneously manifesting the alt-country and indie musical
effects of Whitney and Phoebe Bridgers. Podge’s honest lyricism with unique production
style express his own expanse as a musician. Podge began to independently record and
release his original material in 2018 with his debut folk-indie singles; 'The Dark', ‘Move on’
and 'Family Tree'. Endlessly earnest themes began to emerge in Podge’s lyrical content, with
‘The Dark’ exploring the pitfalls of self-deprecation as Podge’s warm tones implore: “As I
throw my stones it’s hard to be alone and I know one day I know I’ll fall apart in the dark”
set amongst an ominous soundscape of acoustic guitar strums which punctuate a more sinister
electric guitar that soars heartbreakingly as Podge identifies the threat of darkness he must
carry.
With such profound lyricism, embraced with explorative instrumentation, Podge was spotted
by Echoing STEM as the 2017 newcomer to “keep your eyes and ears on”, as he continued to
release his Debut EP People Leave In Colour on the 4th of April 2018. Released under his
own label PCLM Records to a great reception, it was the catalyst for his Irish Post Indie
Artist Of The Year Nomination, going up against big hitters such as The Academic, Keywest
and All Tvvins. Burgeoning out on his solo tour in July 2018 supporting his second EP The
Big Break, Podge found his innate talents for independently playing and producing the
entirety of his new Lo-Fi concept album. Following on from his successful troubadour-style
tour, with dates opening for English indie artists Rozi Plain and Kiran Leonard, Podge
recorded his third EP Falling Backwards Into Nothing, 2019. The EP’s first single ‘The Boy
Who Almost Went and Lost It All’ went on to gain heavy attention online. Exploring his
much more ambitious sound influenced by Psychedelic music and Hip Hop, Podge founded a
new record label, ‘Thanks Alex Records’.

In between opening for British anti-folk band Crywank, 2019 saw the release of a further
experimental Podge Lane, releasing; the Hip Hop inspired 'Crash And Burn', the rocking
'Fall', the sentimental pop influenced ‘'How Can I', Podge reminds us to continue to challenge
genre boundaries and to 'Get With It'! Enticing audiences this year with springing two live
albums into the mix, Making It Up As I Go Along Part 1 and Part 2, Podge’s release of his
highly anticipated concept album Weak Beneath the Knees was released under his exciting
music venture ‘Teip Records.’ Through the progression and expansion of Podge’s musical
catalogue he has continued to challenge musical boundaries, while maintaining his reflective
honesty at the heart of his songs, a meaning that continues to set Podge Lane apart as a
unique and fearless musician, as is highlighted within his upcoming single, ‘Don’t Take It
From Me,’ September 4th, 2020. 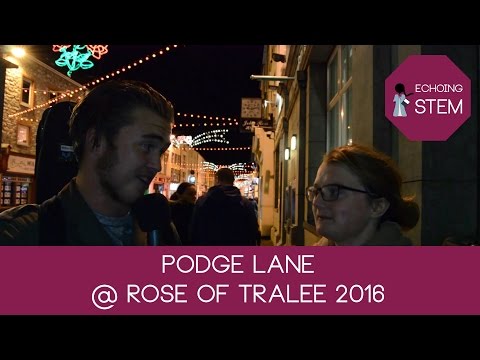